Joseph Osborne walks into Bridges Academy at Melrose, an elementary school in Oakland, CA carrying a guitar and paint brushes. His canvases and instruments may look like tools for having fun, but Osborne’s music and art classes aren’t the typical creative exploration one would expect to see with 2nd to 5th graders.

Osborne runs Emotive Arts, an organization that engages elementary school students in creativity and social-emotional awareness. When he puts a guitar in the hands of a child, he sees it as more than an opportunity to learn a few chords—he sees it as a tool for exploring deep levels of emotional awareness and learning.

Osborne formats his classes around interactive play, and naturally among adolescents sometimes, conflicts emerge. As children’s real life experiences come up, they are encouraged to explore their natural reactions in the safety of the controlled environment.

“You set them up for a chance to really experience the full gamut of what their emotions are going to offer them within safe limits,” Osborne says.

This emotional exploration is done in simple ways. Osborne starts with empathetic listening and simple, open-ended follow-up questions, such as, How did it go? and more importantly, How did it feel? 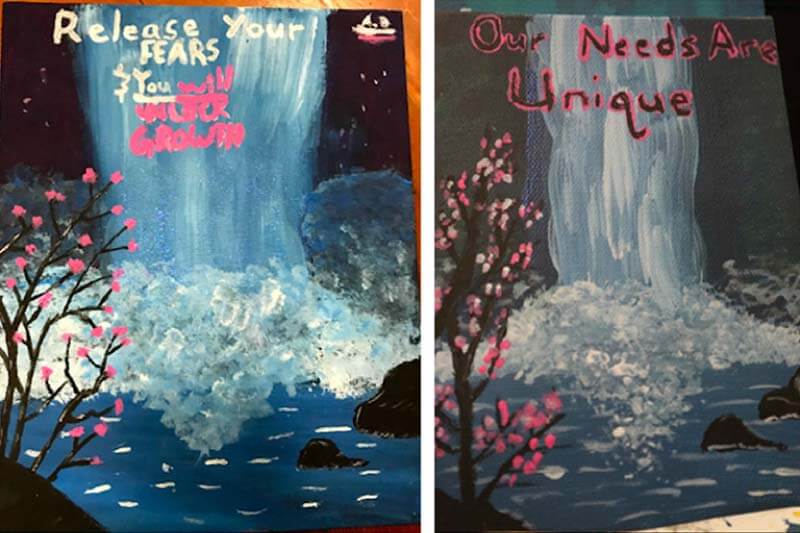 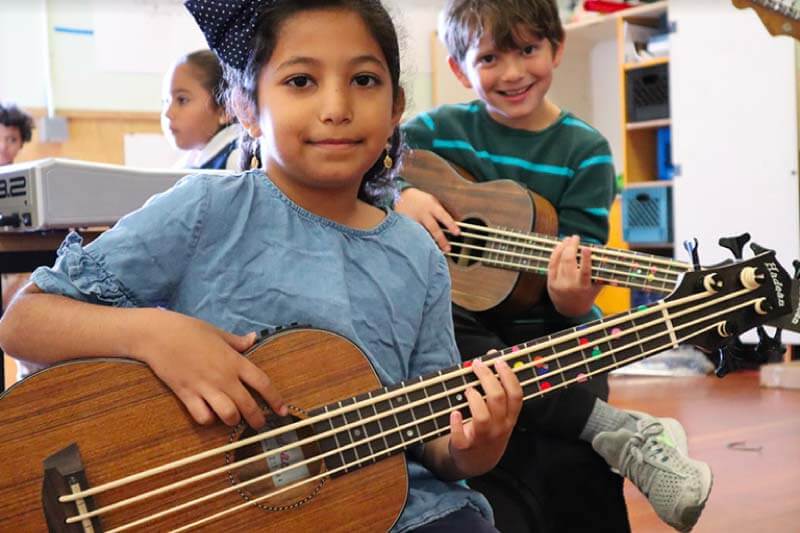 Students learn chords in preparation for a group show in front of the school.

Osborne admits this type of work is difficult even for adults. With elementary school students, he says, “sometimes you get six words. Good. Okay. Fun. Happy. That was it.” This is where the power of the arts comes in. Experiences become inspiration for paintings, songs, music, and even performances in front of the whole school.

“Music, visual art and acting are byproducts of the experiential learning games we play,” Osborne goes on to explain that the kids don’t have to rely on just their words—they get to use their imaginations as well. And as they develop new skills, the children also learn self-determination, hard work, and patience.

Experiential learning isn’t new in education. Every day, kids march into chemistry classes, where they learn about science through the cause and effect of chemical reactions. Field trips bring textbooks alive as children walk the halls of museums, aquariums, and state capitals. But developing social-emotional learning skills is still not widely integrated into the school curriculum, and Osborne is committed to doing his part to help fill that gap.

Osborne remembers teachers from his own childhood who comforted him and helped him to grow emotionally when he was in his greatest need.

“I lost my dad at a very young age… I realized that my male teachers were the most influential role models that I had. I was really drawn to the profession based on those selfless teachers who were really compassionate to me as a struggling youth who experienced a lot of trauma.” He began singing as a creative outlet, and when he discovered educational psychology in college, the two fields clicked. 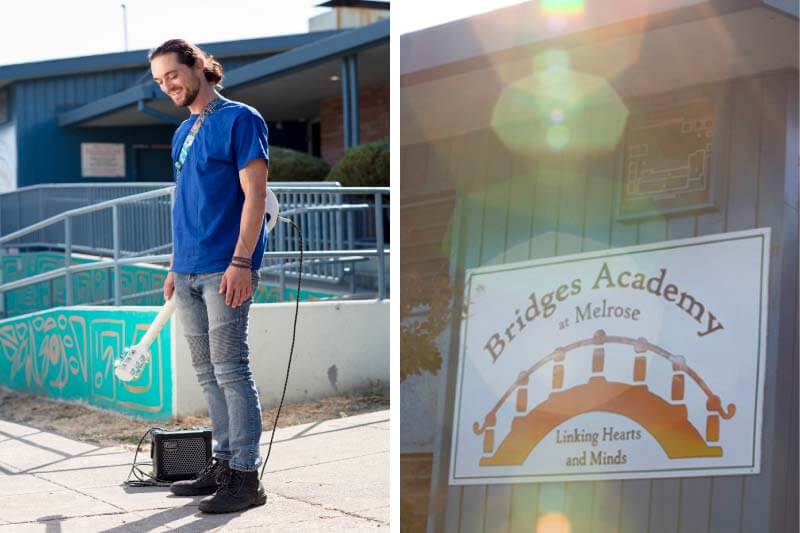 Osborne believes all kids need this type of education and care in their lives.

Bridges Academy at Melrose serves many students who are the first in their families to have access to formal education or the first to go to school in the United States. A number of students at Bridges have parents who are undocumented and fear ICE Raids in their city. Many parents work multiple jobs to make ends meet and others lack a formal high school education so homework help at home can be challenging. These circumstances create barriers that need to be addressed in order for students to do more than survive, but to thrive.

The belief behind exploring emotional intelligence in children is similar to the philosophy of overcoming trauma in adults in that it revolves around leaning into emotional experiences, rather than suppressing them.

“There’s nothing wrong with our emotions,” Osborne explains. “We need to know where they’re coming from and whether we’re going to hurt people with them. The same is true for all students,” he says, “regardless of socioeconomic status or income.” 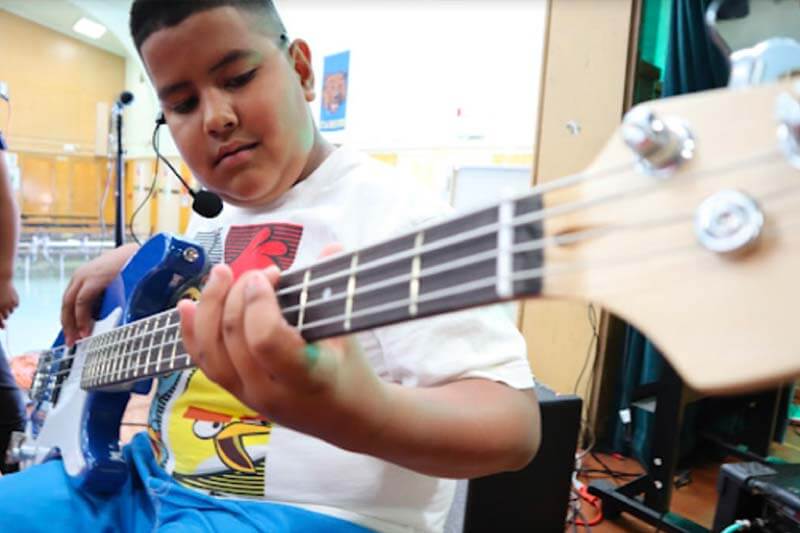 Learning a new skill teaches many lessons about growth.

Osborne tells the story of a high needs student who was assigned a full-time aide due to behavioral issues. The student cheated at a group activity, and the other kids became upset. The student stormed out angrily, kicking over a trash can on the way out. For Osborne, it was the type of interaction he looked out for. He posed questions to the group. “Do people always follow the rules in life? How do we respond to that? Do we respond with anger or with other emotions, or do we try and respond by taking their perspective so that then we can meet them where they are?”

When the student returned to class, Osborne didn’t ignore the experience; he engaged him in conversation about it and celebrated his emotions.

“I threw an iPad in his lap, and asked him to make me a beat,” Osborne says.

The student wrote a song about what happens when he feels emotional, and the conflict came full circle when Osborne overheard another student in the group talking to a friend.

“The next day I heard this one girl with the depths of her soul [ask] ‘What are you feeling? What is your need right now?” he says.

This afternoon, a group of Emotive Arts students file onto the wooden stage, timidly appearing behind black drapes. Homemade art posters hang at the edge of the stage. A cacophonous mix of singing, banging of instruments, and skits ensue.

Osborne is the first to admit that the output of creativity isn’t the point. “Maybe it doesn’t seem impressive. I gave a kid a guitar a week and a half ago, and now he’s on stage performing. But the reason he feels confident enough to is because he had this huge experience of emotional growth.”

Facing challenges head-on, from conflicts with peers to the frustration involved in learning a new skill, provides human beings with the kind of emotional development that builds character. This is what drives Osborne every day.

“These kids are the leaders of tomorrow. They have realized that conflict is an inescapable part of daily life,” he says. “And, while it is inescapable, it does not have to be limiting and dominating.”