Sally Theard has one goal when she focuses on a student, and it’s not about getting them to understand fractions, the fall of Rome, photosynthesis, or other typical middle school subjects. When she looks at a student and sees the fidget of a foot or a blank stare into space, she thinks, “What can I do to help this child have a good day today?”

Theard, a Behavioral Health Specialist at Martin Luther King Jr. Middle School in Berkeley, CA, is assigned students with challenges that impede them from learning, including everything from developmental disorders to behavioral issues. She knows that she is part of a constellation of adults connected to help children and youth succeed. She also knows she often works with those who need the most help.

“I love working with special ed because even though these kids are a little different, I know they can progress,” she says. “We just have to find out what they’re good at and help them with that.”

If Theard sees one of her students displaying signs of frustration, she will take them outside and just listen. Most days don’t end with loads of homework boxes checked but do include a significant amount of time relating and building trust.

“If you don’t want to participate with your classes, that’s fine. We can find other things to do. We’ll do that until you calm down and are able to cope with the rest of the day,” she says. This collaborative approach leads to the mini victories that Theard sees as most important when working with this vulnerable population.

Theard’s compassion for her students may stem in part from her own life experiences as she relates to her students’ journeys of growth and discovery. 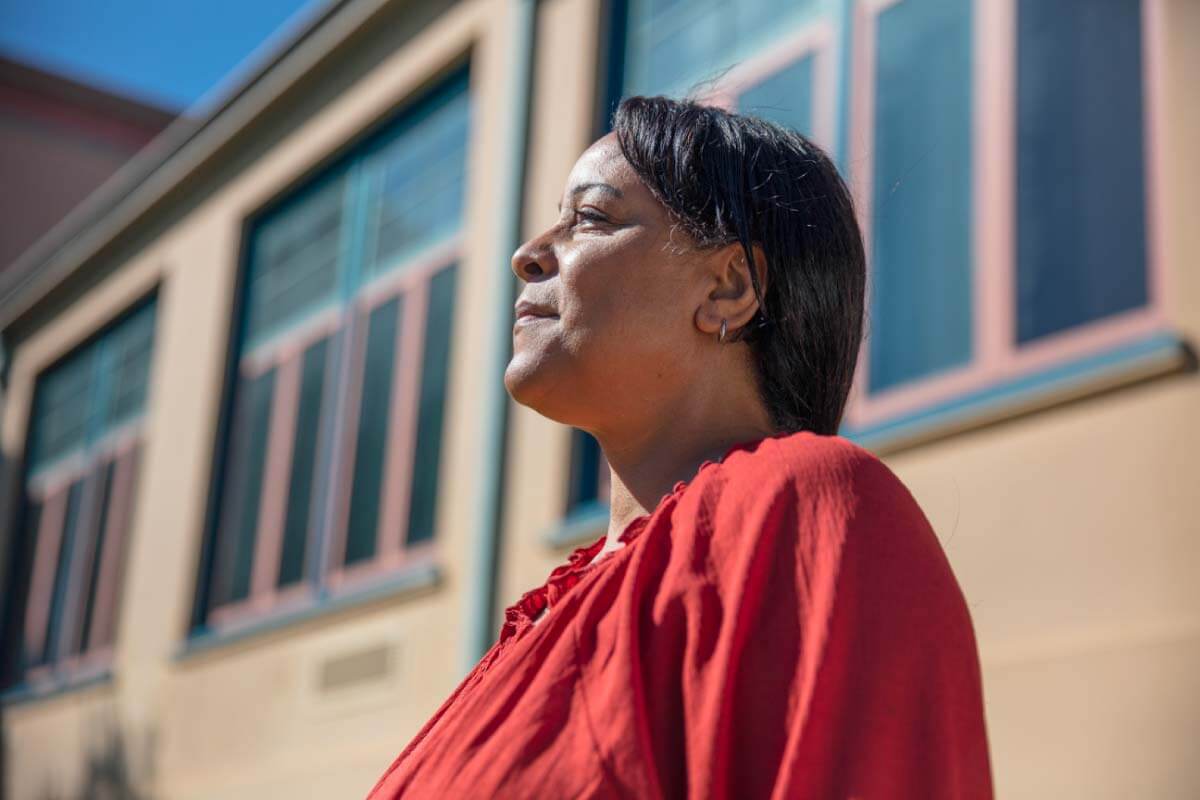 “In the beginning, everything was roses,” Theard says with a straightforward gaze as she reflects on her own story of trauma involving a partner whom she believed was the person she needed in order to create a stable household for her two adolescent children. Like many stories of abuse, her partner’s acts of violence began with words.

“Someone told me that after the verbal abuse comes through, the mental and the physical abuse starts, and I’m thinking, ‘Oh no, that won’t happen.’ But it did,” she says.

The cycle of abuse continued for two more years: a remorseful plea one day, an outburst the next. Theard felt like she could accept her own fate with this abusive man, but it was the impact on her kids that made her leave.

“The effect on them was terrible! Their attitudes changed, their behavior changed. My son quit school for a while,” she says. “You’re not the only one in that situation. They go through it with you, too.”

Theard finally did what she needed to do to survive. She took her kids and left with practically nothing.

Theard found refuge in a women’s shelter. Even though it was only a few days, the shelter provided the space she needed to escape. She felt lost and alone, but the shelter was there to help.

In fact, soon Theard began volunteering at another shelter, sharing a message of hope to other victims of domestic violence. “If I could do it, you can do it too,” she would tell the women who entered the shelter’s doors. With time, she got on her feet and found work at a retirement home located next door to a school. Every day, she could see kids running outside and hear their laughter coming through the school windows.

Eventually, Theard got an entry-level position working with kindergartners with autism and loved it. She thinks a lot of kids with disabilities get overlooked, and they need those extra people in their life to provide comfort and support. Later, when she began working at a middle school as an aide, Theard found her calling.

“They are getting ready to go into the world. It changed me,” she says. 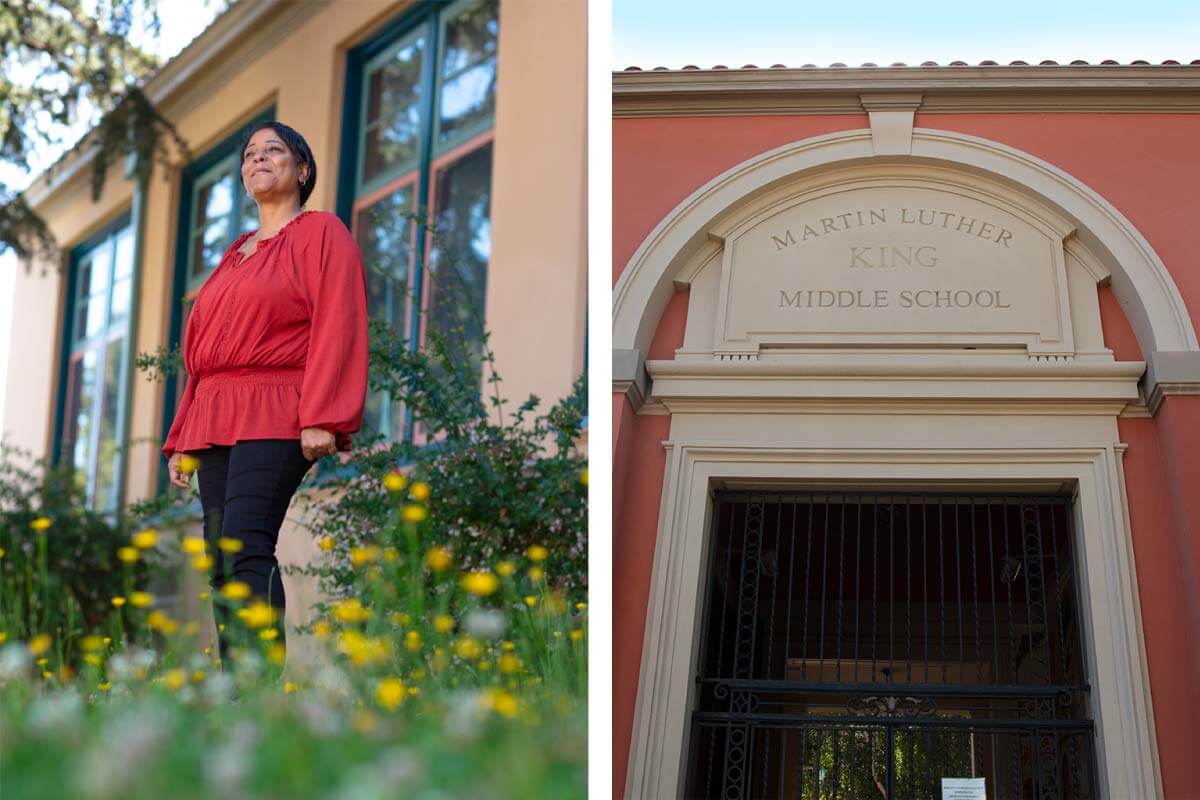 The hustle and bustle of the hallways begins early each school day as kids at Martin Luther King Jr. Middle School file into their classrooms. This morning, Sally Theard is already preparing for her first class, reviewing her notes from the day before, coming up with lesson plans. Again she repeats her mantra, “What can I do to help you to have a good day today?”

Trust and empathy are the keys to her approach. “You’re no different than any other student in this class, we can do it,” she tells her students. For all students, goals are key for creating confidence and celebrating success and with Theard’s students, accommodations can be made. For example, Theard will reduce the number of questions on a quiz to increase the probability of a passing grade. When her students are successful, she uses positive reinforcement by way of stickers, treats, or free time. Positive affirmation is just one of many ways Theard inspires her students to do their best.

Today, Sally Theard’s own children are thriving with families of their own. Still, she remembers her past vividly and holds on to the strength and compassion it gave her.

“Seeing what my kids went through, the uncertainty in their faces – ‘Are we going to be okay?’ It’s not a quick fix when kids have problems like that,” she says. “It takes a while and it takes a toll on them.”

Theard has students who have experienced homelessness, domestic violence, and other traumas that impede their ability to learn. Luckily, her caring, consistent, everyday actions aid them in their ability to heal.

“As I heal, I can help them because I already know what they’re feeling and going through,” she says.